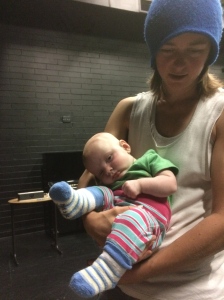 Elphie gives notes after a rehearsal

When Lily and I went to Hothouse Theatre in February 2014 to undertake ten days of creative development on My Pet, My Love, we had no idea that a year later we would be putting on a one man show in the Midsumma Festival. Well, here were are and our show opens in less than three weeks!

We’ve been rehearsing like mad, with help from Lily’s new daughter Elphie (she’s a great assistant director, who very rarely spits the dummy!) and have two incredible designers on board, James O’Donoghue, lighting and sets, and Jai Leeworthy our sound designer. We are also very fortunate to have secured the La Mama Courthouse which is the perfect venue for our piece.

I am very excited to be sharing My Pet, My Love with an audience as this piece has been a long time in the works and one that is very personal to me. A lot of people have asked me what the piece is about and it’s difficult to answer that in one sentence.

In 2005, my Nonna began to forget things and in 2007, she was diagnosed with dementia. In 2012, she died, a shell of her former shelf, in the dementia ward of a nursing home. These events, and the impact they had on my family were the inspiration for this show.

I saw the effect my Nonna’s dementia had on my father, and then in turn, on me and so many questions started going through my head. What if my father develops dementia? Will I be as strong as him? What if I develop it? Or my partner? My friends joke that I’m forgetful and have early onset dementia, but what if there’s some truth to it? It’s a terrifying thought.

So, if I had to sum it up in a sentence – My Pet, My Love is a one man show about fish, forgetting and the fear of dying single. 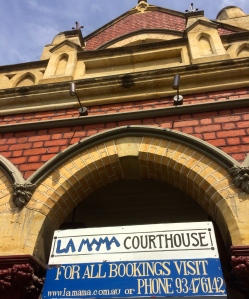 Tickets for the show are on sale now and can be purchased via the following website – http://lamama.com.au/summer-2015/my-pet-my-love/

I hope to see you there

Since the frenzy of Kiss Me Like You Mean It, I’ve bumped into many you and heard your feedback. Inevitably, I’ve been asked the same two questions: “How’d it go?” and “What are you doing next?”

To answer the first; it went really well. We got great reviews and good audiences. We sold out four nights and had a successful opening night attended by industry guests, friends and family. You can read some of the reviews here. Being a well-seasoned project manager, I set our “key success factors” with Rob when we started in July. We achieved all of those and nearly three months out, I’ve recovered from the adrenalin overload and can smile about it!

In response to the second question, “what’s next?” well, it’s a little more fluid…

MARC Up was recently awarded a two-week residency at HotHouse Theatre in Albury to further develop an original work My Pet, My Love. This piece has been brewing since 2010, so later in the year Rob will be heading up to HotHouse with a team of artists and we are very excited to get the opportunity to develop the piece further.

Before that, Rob is about to make his appearance on stage at La Mama in Unconditioned Heart directed by Suze Smith, and then will be heading off to New York. He’ll be building on his Meisner training and attending Wendy Ward’s studio for six weeks. Then he’s off to party in Canada with his best mate.

My actor child is feeling neglected and needs some love. So I’m auditioning around the place and training with Director Nadia Tass.

But I just can’t stay away from producing! I’m producing Yarn, for Melbourne Fringe Festival, a one-woman show starring the very talented Lily Fish. Let me know if you want to know more.

Creating MARC Up was an opportunity for Rob and I to act and get our work in front of audiences. But for the moment, we’re doing our own bits and pieces while we are on the hunt look for the next project. So MARC Up is “in development” for now…

A big thank you for supporting us and telling us what you think on facebook, twitter and in person. Let’s keep the conversation going…